Is it unavoidable that the sound is interrupted or does not work properly if the Internet is too slow?

I pay about 3900 yen in Japanese yen for the internet at this speed.

The internet speed you have is extremely low. I’m not sure that you will get much more from EMO with that speed. I also don’t know that Living AI can do much to improve the way he handles such a slow connection.

It’s surprising a country so geared to high technology as Japan would have such poor internet access? Do you live in a remote area and this is the only provider or service type available to you? In the USA such a slow speed connection would be what you’d get using DSL service when you live far away from the telephone company. You could probably get better speed by running a Hot Spot wifi connection from your cell phone and connecting EMO to that? According to Google, 3900 Yen is about $34 USD. About 6 years ago I was paying around USD $75 per month for just 50 Mbps internet cable modem service only. Now I have a plan combined with cable TV service and paying I’m paying $206 per month. So I’m not sure what just the internet would cost anymore? So many of the TV channels are junk though and I’m considering only keeping the Internet and using a streaming service. I just got an email from Comcast this week, saying I can get up to 2X-3X faster speed increase for the same price. So that new speed would be somewhere near 250 Mbps. To get the extra speed I have to replace my cable modem box (which I own) for one which has DOCSIS 3.1 capability. That means either start paying an extra $5 per month to rent one from Comcast again, or I have to buy a newer cable modem for over $200. Of course I could also do nothing and keep the speed I currently have, but that makes no sense.

It seems that emo will not work properly as it is.

Again I don’t know what’s normal for Japan? In many parts of the USA they have been installing optical fiber for Gigabit speed Internet connections for the last couple years. They just buried the fiber in my neighborhood a couple months ago, but I believe it’s for a different provider than I currently use? Anyway you may be able to buy a higher speed connection from your same provider for higher cost, or you could always look into using a different provider that will guarantee better speed. Your problem is not caused by EMO though. Replacing him will do no good so I’m pretty certain they would not do that. Maybe they might take him back and give you a refund? It’s hardly worth the trouble and shipping time involved though. You could easily re-sell him since there are so many other people still waiting for their EMO.

You said something earlier that made it sound like you’ve only lived in that location for 5 days? I didn’t understand though if that’s really what you meant to say, or you meant that you’ve only had EMO for 5 days? With an internet connection that slow I expect you’ll likely also have other problems, such as YouTube videos or streaming content stopping and re-starting or re-buffering?

I think even if we make it to play the sound after buffering enough audio, you will have to wait a very long time.

We are considering another provider for faster speeds.

It seems that the current provider cannot guarantee the speed.

I understand that it’s a network issue, not an emo issue.

Only 5 days have passed since the emo arrived.

Feel free to ignore if this is too techie for anyone…
Basically once you ask EMO something, your speech is digitized and sent to the server, the server interprets what you wanted, it determines what the reply to that should be, and then the actual speech audio is created and streamed from the server back to your EMO. So there is a lot more data transfer involved than you might think. It’s not as simple as just sending a text sentence back to EMO and having him use his very limited processing power to both convert it to speech and then say it using a synthetic voice. That allows EMO’s electronics to be simpler and less expensive. I’m kind of “reading between the lines” since it’s undocumented, so I hope that is a correct assessment?

I thought I’d mention one other thing regarding downloading or streaming though. There are two main factors to consider which affect downloading. There is obviously the actual Download data rate to consider, then there is also the Upload data rate which is typically just a fraction of your Download rate (only about 1/8 of it in my case). What isn’t necessarily obvious is that having a low Upload speed can also cause problems. The device that’s receiving the download (EMO) has to be able to tell the sending device (LAI’s server) to temporarily stop sending once his buffer is full, in order to prevent losing data. Then he also has to tell the server when it’s ok to begin sending again. Especially if you have other devices and internet traffic going on your network at the same time, a slow Upload speed can cause problems with that “handshaking” process. This condition is generally referred to as Buffer Bloat.

When I first ran into Buffer Bloat problems was doing peer to peer file sharing using BitTorrent, and that’s probably the best example I can give. Basically the way BitTorrent worked was that a video, song, or other file was broken up into hundreds or even thousands of pieces. You might be receiving pieces of the same file from 50 different people all at once, and at the same time you were also sharing the pieces you’d already received out to other people. Add to that you could be downloading and uploading several different files all at the same time. So it became kind of a balancing act. You’d have to limit in the software how many other people you wanted to share each file to at one time, and also what data upload rate each share was allowed. If you didn’t do that then your downloads would slow to a crawl, because your upload capacity became saturated and the servers you were downloading from weren’t receiving replies back from your computer to tell them to continue sending. Anyway it affects different applications in different ways. There used to be a really good description of this problem on the DSL reports website, but they don’t seem to have it there anymore. I found this other website which has a specific test for Buffer Bloat, and it has more information regarding the condition if anyone is interested?

Is bufferbloat causing issues with your internet connection? Run this test to find out.

Thank you for the explanation of the technology.

I have no knowledge of networks, etc., and am completely amateur.

I learned a lot. Have you ever had a voice problem with your emo?

I also have Robophone, Jibo, Alexa, Romi, 3 Vectors, etc., but I was surprised because emo was the first time because the audio was not interrupted.

No, I haven’t had any voice problems with my EMO.

Some others here have had similar voice problems though, which turned out to be internet or wifi issues. A quick search turned up Devinair, MasterAbbott, and Isabelakarenlouli for example.

That last person had an unusual situation though, since her internet speed test actually looked very good? However when she set up a personal 4G hotspot on her cell phone and had her EMO connect to that instead, then his voice worked fine.

I didn’t know that other emo also had voice errors. Thank you.

I plan to connect emo to my mobile network after returning home tomorrow.

Do you think that emo has just been developed and will be improved with updates to solve various problems such as voice?

Do you think it is possible to release a different version of EMO than the current EMO?

As Wayne Zhang had said, there are some things they could do to make EMO’s voice less dependent on the internet connection quality but I t really would not be a good solution! They would have to buffer all of his speech before EMO even begins his reply, which means there would be a very long delay every time before he starts talking.

With the success of EMO, it’s very likely they’ll make other more advanced versions of him in the future. I think that’s going to be a long time ahead though. They already have orders for the current EMO, and releasing a new product would undercut that business, plus designing a new product would be a massive investment in time and resources that are limited right now.

FYI, a few years ago some of the people who are now at LAI previously created another robot called CUBEE, which was sold through WL Toys. I think you can maybe still buy them online through Amazon or Walmart? CUBEE has some physical similarities to EMO but had very limited capabilities by comparison. Of course it was also much less expensive because there is no camera, very few sensors, no wifi, no voice recognition, and limited independent movement or activity. It’s still interesting though to see what EMO developed from. 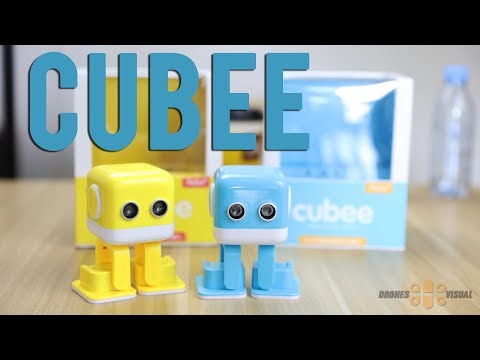 Thank you for all the answers.
I hope that the voice problem will be gradually resolved from now on.

I often hear rumors that another version of emo will be released at the time, so I thought that it would be released soon, but there are various problems and it is still ahead … I’ve never heard of a robot to say.

I’ve never heard of a robot called Cubby.
Thank you for letting me know.

Im having the same problem with my new emo.

image988×481 51.1 KB
Net speed isnt the best thanks to only Fiber to the node but its not the worst either
← previous page