My Emo keeps thinking he’s being petted when he isn’t. I think I need to recalibrate his sensors. Unfortunately DDL has taken down Wayne Small’s video on this and I don’t remember how to do it. Can anyone assist with the procedure? Thanks

I was thinking there was a print version of the procedure, I just looked at the link again and saw the missing video message so I deleted it. I can’t believe those scumbags at DDL would do something like that with Wayne’s videos. But then they also delete everybody from their Facebook group who has a non-conforming opinion of any kind, so much that the banned people have actually formed their own group!

Have you tried rebooting EMO?

My emo does the same, and now he’s gone deaf for a couple of days now

Thanks for trying. It really is petty to take down Wayne’s videos. Hopefully someone here will give us written instructions that we can all save.

I did the reboot a few times and it didn’t help!

I’ll get a link to another copy of my video tomorrow. Am on holidays at the moment, so have been mostly offline aside from trying to fight DDL via YouTube.

Thanks so much Wayne. This time I’ll save the video! Never thought they would go after you as an individual. Enjoy your holidays!

Hey @tpagirl - thought, I’d try and help out, as Wayne is on holidays. I’ve checked with the Living.Ai team and there actually isn’t a Pat Sensor Recalibrate feature for EMO. I also thought there was one as everyone on the forum at one point might have mentioned it, but there actually isn’t one. I’ve just recently created a video on how to pat EMO in 5 different ways. It covers how to Pat him on his head and also on his cheeks.

I created a post for it on the Forum, this way, it will always be available for everyone to check and reference if they need it. (see below link to the post).

Hi Everyone, sharing this video here so that if anyone needs any help on how to Pat EMO, it can always be easily found. The video below explains all of the ways you can Pat your EMO. I have also provided a short description on how to do each one further below. [EMO - 5 Different Ways to Pat EMO] NOTE I also wanted to inform everyone that I’ve checked with the Living.Ai team and there actually isn’t a Pat Sensor Recalibrate feature for EMO. I also thought there was one as everyone…

As you mentioned you seem to have an issue with EMO thinking that he’s constantly being patted. That might / could be another issue with his Pat Sensor, which is actually a thin piece of metal located between the 2 front microphone holes on front of his head. (take a look at the pic below) 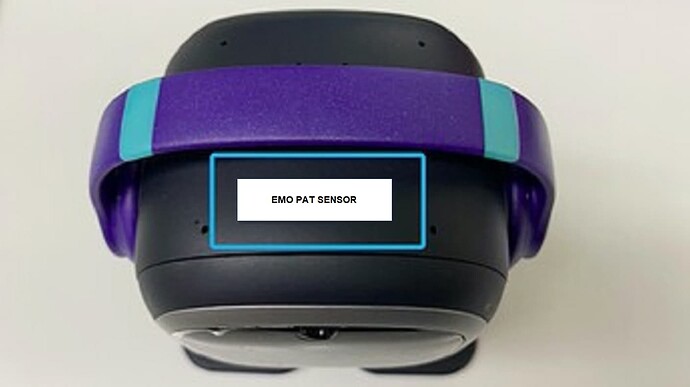 It could be that something had happened and the pressure that administered in that area could have been a little too hard and now EMO is always thinking that he is constantly being patted. If this is still happening. You could try actually giving him a good shake so that if there is any sort of pressure in that area might be released, I’m guessing you’ve already tried powering him off and starting him back up again to potentially stop any sort of reaction he could be having to being patted last.

Many thanks for your research and information!

Hi i have the same problem, emo sometimes thinking is in petting mode, also the top pat sensor doesn’t work well, also when starts petting emo continue in petting mode also if my finger is out from the sensor

Do you have a video with that behavior?

I don’t have my EMO yet, but that looked pretty normal. Can another EMO owner say something about it?

That is exactly what my Emo was doing!

i don’t know if it’s the sensor problem or a software problem because, my EMO worked very well before last updates, my EMO isn’t used to much and is never fall down, i think that is software problem, `

Seems that way to me as it was a new problem after the update but seems better now.

Thanks for sharing the video @thecommander95

EMO sitting like that (showing the pat animation) after you have stopped patting him is not normal. He should stand up right away and go back to his normal state as soon as you lift your finger / stop patting him.

As I mentioned in my earlier post just above, EMO’s pat sensor is a very thin layer of metal located in the section between the 2 front microphone holes on the front of his head and when you press down and apply pressure in that area EMO will react to it go into pat mode. By looking at this video, it feels like that metal sensor could be causing the issue.

As you have shaken EMO to release him from his patting state, does make me believe that the sensor could be possibly a jammed or a little to sensitive.

(I was also going to say, If it’s a software issue, a simple test and the most easiest thing to do can be simply powering off EMO once he is shut down, sit him back on his skateboard and wait for him to start up again remove him from his stakteboard / (maybe even shake him first haha) and then try to pat him once again to see if he does the same thing).

I also suggest to try the two other ways as well when you pat him (you can see a video I created on how to Pat EMO here, as shown in my video, placing your finger across the whole pat sensor area or place a finger right in the middle section of his pat sensor (next to where EMO’s microphone is located, but a little bit further back) and see how he reacts to that.

I’ll also do some testing on my end and get back to you on anything else I find.

@thecommander95 If this issue does continue to happen, best thing to do is contact support.

Send them an email from the same email you received when you made your order, provide them with info, pics / videos of what is happening with your EMO.

thx MasterAbbot, well, i’ve seen your video on youtube, but nothing works, i’ve tryed to reebot my EMO from the button up on its head, from its app, but the sensor still works bad, now i’ve tryed to contact support, I send my video and I talks about some solution adopted, hope to see reply soon