Hi all what u think about sending friend requests on app and be able to call interacting with Emo like a video or voice calling?

That would be very interesting!! Since it can follow sound, and has a camera, it is TECHNICALLY possible. But, the coding behind that would be fairly large. It is something we can suggest to the devs… you know,… in their VAST AMOUNT of spare time.

It’s an idea for sure, but I’m not sure I like it from the perspective that many of these will be in the hands of children. If Living AI did this they would need to have some form of protection for the kids… sounds like a minefield to me.

Something similar seems to be Planned 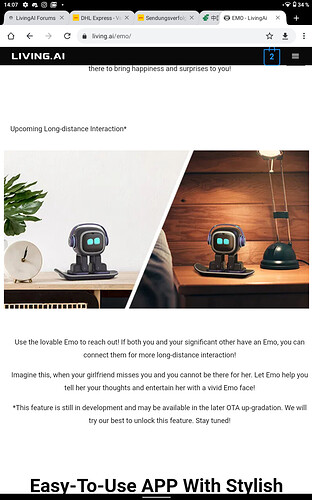 I think that this is different though to calling… it allows faces only and no video link etc or at least thats the way it reads to me. I’ve not heard anything from the dev team on this feature yet, so I can’t say more.

Very easy to do all code has been done all ready for LTE or wifi and Bluetooth but you can not make calls in most country with out paying taxes for Communication taxes or fines. Goggle did it with Facebook and used smart speakers. Google dou app or settings vector to post in Facebook would be one option. I have even used vector or EMO to stream to twitch works great as a wifi or Bluetooth cell phone. They even have 5g robots tested I’m sure very easy for most hardware technologest now a days.

The lawyers teams might be best to talk to about this question. Lots say the company enforcing the laws for communication are not going to give away profits.

But yes it’s just a cell phone that moves. We can load the ai technology into everyone cells phones that be a crazy day.

I didn’t say it was hard to do from a technology perspective. I said that there are things that need to be considered from a security perspective given the need to protect children. From a legal perspective and as a business owner myself, there is a risk assessment that the business (Living AI) needs to carry out to determine if this is something they want to do, ie allow video calls from EMO to EMO. I think they need to focus more on developing the core strengths of EMO and the things that make EMO different vs turning EMO into just another Alexa device, or just another Video phone.

Same as cell phone computers nothing really that big of a deal for lots of company’s. Only problem I see is internet traffic for ai servers when we sell over a few billion computers chips the ai can work with. I hope they allow the technology into my cell phone and laptops and watches.

My watch as a bank interesting.
Can not wait.
Vacuum cleaner and next cars.

Why would children have an advanced robot like Emo? Maybe this is just me, but I see Emo as more for the adults, or at least 16+. Both for the price and the features. I don’t see kids having the patience to use Emo the way he’s intended to be used. A lot of kids don’t understand the concept of waiting to see what happens. This is true for some adults too, but kids are more likely to throw that nice expensive robot in the bottom of a closet and forget about it. Even the 8-12 group is impatient from what I have seen. I don’t mean to offend anyone, and I’m not saying all kids are like this, but I hear stories all the time about people giving kids vectors that have gotten a nice look at the bottom of the toy box. And while Emo isn’t the same as vector, he’s going for the same target audience.

This is just my opinion.

I don’t think only adults will use EMO. I use EMO too but my son also uses EMO. I therefore think Wayne Small’s concerns are reasonably reasonable and reasonable. Proper security and safety measures are needed.