I backed Eilik some days ago. It’s another emotional robot/pet. He is very different from EMO. He can’t speak, just doing funny sounds. He has an OLED display for showing his emotions. He can’t move except the rotation of his body and head on his base. He has arms and can move them. He can be petted on his head, his belly and his back. He doesn’t need internet connection. He doesn’t have any Alexa/Google association.
He is ideal for my mother who is old and can’t speak English. He would not go anywhere. You can set his volume to your desired value.

Yes I seen that one and he works with/interacts with more than one Eilik which is nice but I prefer Emo, it reminds me a bit of Astro bots on PS4 but because it doesn’t walk I’m not really interested in him sorry. Besides I can’t have every robot lol

Yeah, I prefer EMO too. As I wrote it’s for my mother. It’ll be perfect for her.

I’m sure she’ll be delighted with it. And easier has it stays in one place wherever you’re mother puts it, it’ll be perfect for her.

@NendosColl ,
I was quite interested in Eilik at first but decided not to get one, because there were a lot of unanswered questions. I’m still a member of the FB group though just to watch what happens and see how people use and enjoy them. Eilik doesn’t have nearly the capabilities of EMO, but that’s reflected in the price difference. You can still order Eilik through Indiegogo for $119 USD (whatever that equivalent currently is in HKD).

If you had bought Eilik for yourself I would say I hope you bought at least 2? The one really innovative feature they had is the magnetic connectors in the base which join them together when set side-by-side. I believe you can connect up to 8 of them (but I don’t think they ever did say?), then they can perform little interactive scenes between themselves. It would be interesting if they go further with that and it becomes more free-form and not totally scripted. Some of the interaction scenes they’ve posted videos of so far are pretty cute though.

Seeing 8 of them linked really reminded me of that early computer game called Android Nim, is anyone familiar? I think it would have been a really cool demo to have 3 rows of linked Eilik’s and then an individual off to the side of each row (would need to be connected by cables?) which are the guards and would be holding magnetic laser guns. In the original game as each player chooses a row and quantity the guard for that row looks to see if that many androids in that row are still alive, he looks back and shakes his head yes or no, then if yes he raises his arm and shoots which removes the selected number of androids. Play continues back and forth and whichever player removes the last Android wins.

Here’s a video of a more recent remake of the game, which is much more highly detailed than the early character-based graphic figures on TRS-80 and PET computers. It seems a little slow and clunky though, but the androids actually trash talk during the game! 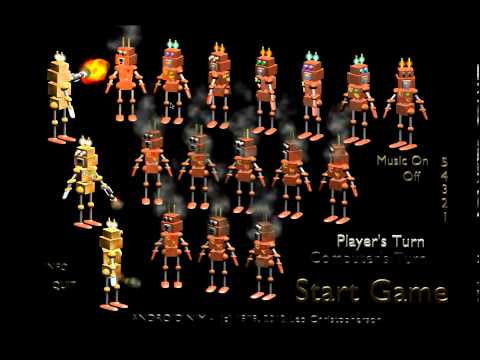 I can’t afford it.
My Christmas money and some of my benefits have gone on Emo.
I want him in my loving hands 1st.

I might try backing it up early. They’re only £80 so they’re quite a lot cheaper than emo, and it will be cool to get emo a play buddy

Had a look its really cute but looks limited on its own. love the little arms and linking them up together but I cant wait to shoot Emo instead and watch him fall down lol.

I tried to teach that trick to my bird when i first got him and scared the absolute crxx out of him.
Am glad Emo already knows how to respond lol 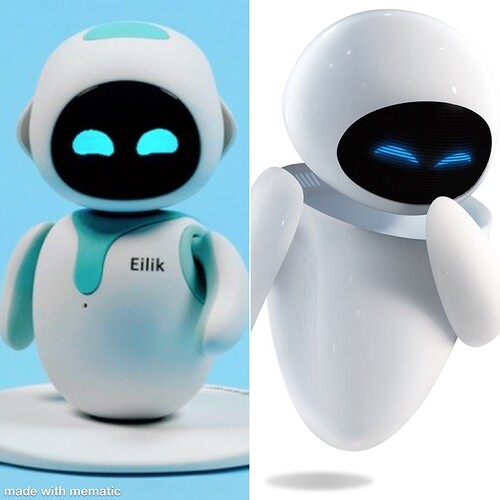 Reminds me of Eva from Wall-E

Before the Kickstarter ended and it got moved to Indiegogo, he was even cheaper. It was $99 USD for their Super Early Bird Special. You could also add-on additional Eilik’s to your order at that same lower SEBS price even if you were too late to buy your first one at that price. They really encouraged multi-robot orders.

Energize Lab is almost in the same position where Living AI was this time last year, except they didn’t have their Kickstarter canceled by another company fearing competition that forced them to do it all on their own. EL was also a new start-up company. They said they’ll begin shipping in May (if that date holds), and they already had 5 thousand pre-orders at year-end to fill (including many multiple-robot orders) while they’re continuously accepting new orders on IGG now. It will be interesting to see once they start shipping, what the production and delivery times are from their Hong Kong location, and how much flack they get over possible delays?

(Corrected the original SEBS price to $99)

I am super excited!! I feel like with this type of Bot, you are better off with “at least” two of them. I believe there is more interaction when there together and its even stated in some advertisements that they have more fun with there own kind.

There are a lot of cute aspects to Eilik. I’m sure you’ll enjoy him and you’ll be happy you decided to get 2. I may still break down and buy later once I see what the users think of him. The price isn’t that much higher now that I can’t afford it.

Crowdfunding is always a risk. I already lost some hundreds of dollars on failed projects. So I think one is enough for now. If they would be able to ship final products, I can order another one.

I’ve seen this one as well, and was going to suggest it here in the Forum too a while back. I personally am a little concerned with the crowd funding risk, as I’ve been burnt a few times as well on other failed projects. If anyone ends up getting one, I might consider getting 2 as well